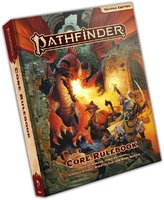 The Pathfinder Roleplaying Game puts you in the role of a brave adventurer fighting to survive in a world beset by magic and evil!

Take on the role of a canny fighter hacking through enemies with an enchanted sword, a powerful sorceress blessed with magic by the hint of demon blood in her veins, a wise cleric of gods benevolent or malign, a witty rogue ready to defuse even the deadliest of traps, or any of countless other heroes. The only limit is your imagination!

Bonhomie games says: We love the independent spirit of this game, which is embedded in its history.

When Dungeons and Dragons 3.5 edition ended and 4th edition started, some gamers took a different path. The Pathfinder Roleplaying Game is an evolution of the 3.5e rules set, with which it is compatible with minimal effort. It was designed using the feedback of over 50,000 gamers who have downloaded and commented on the rules, smoothing some of the rough edges of 3.5e.

Players need only the single 576-page Pathfinder RPG Core Rulebook to play, while the Game Master who controls the action will also want the Pathfinder RPG Bestiary and Pathfinder Gamemastery Guide. The Pathfinder RPG is a fully supported roleplaying game, with regularly released adventure modules, sourcebooks on the fantastic world of Golarion, and complete campaigns in the form of Pathfinder Adventure Paths like Council of Thieves and Kingmaker.

Good gaming to you!