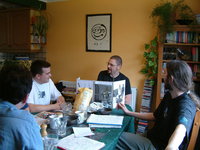 At the heart of our product range is the new fifth edition of Dungeons and Dragons, released in 2014. In our Adopt a Game section you will see products from the other editions too.

The new range of minis are on our D&D miniatures page, along with some of the older out of print editions too.

At bonhomiegames.uk we doff our caps to those key figures in gaming history that laid the foundations for our hobby to flourish - HG Wells and his 'Little Wars' book; Gary Gygax with Dungeons and Dragons. As our range grows, we will also salute the modern innovators and independant games designers, who keep the big boys of the industry on their toes. We thought the best way to bring these two themes together was by stocking the latest edition of D&D.

Top Tip for RPG DMs and Referees: No matter what the game or what the genre, 'cool is the rule'. When we play typically if a player comes up with a remarkable idea for what their character is going to do, just let it succeed without a dice roll. This is especially valuable when someone is acting in character, and the action adds to the story and is cinematically appropriate. We often think of role playing sessions as being like TV episodes, and the 'cool is the rule' approach should always apply to an action that would be a memorable, talked about highlight of that episode. Use sparingly, maybe once or twice a session.

To balance this though. . .

Top Tip for RPG Players: This tip is call 'Pulling a Dougie'. Dougie is a dear American friend of ours and appears to demonstrate an unusual capacity for distorting the rules of mathematics. Time and again he has shown that the more time and imagination you put into your description of your character's actions, the more likely that you will roll a critical failure. 'Pulling a Dougie' isn't chatting up our friend from the US, it is guaranteeing failure through over elaborate description. You avoid 'Pulling a Dougie' by rolling first, and matching your description to the dice roll. The astute among you will notice that the tip for DMs and the tip for players run in slight contradiction to one another.

The best place to buy the new 5th edition of Dungeons and Dragons, with all the D&D 5e rules and supplements available here.

The latest range of Dungeons and Dragons miniatures, to support the launch of the fifth and newest edition of D&D.

Check out our range of 'clones' of various editions of D&D, both ancient and modern, including several we've backed as Kickstarters

If you love 5E but would like a little more depth to the rules, Level Up is the new game for you!