Categories ConVivial 2020 Getting to Caldicot 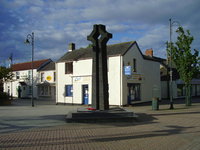 Getting to Caldicot Castle

Caldicot Castle is in rural Monmouthshire,

so if you are using public transport

you need to plan ahead.

Caldicot Castle has a large public car park, which is locked overnight.

The address for Sat Nav purposes is

Caldicot is easily accessible off the M4 (Junction 23a Magor) using the 'New' Severn Bridge (now called the Prince of Wales Bridge).  You head up through Magor & Undy, then Rogiet and finally Caldicot on a straight road

If you use the 'Old Severn Bridge' and the M48 you come via Chepstow and head down through Pwllmeyric to Caldicot.

The X74 Bus runs between Newport and Chepstow.

If you get off the bus at Caldicot Cross you are at the start of the pedestrianised high street (Newport Road).  The road opposite the bus stop is Church Road, and the Castle is two minutes walk down the road, behind the Castle Pub.

As at 27.10.19 the timetable is visible here: https://bustimes.org/services/x74-newport-chepstow-via-caldicot

Caldicot has a small railway station (Caldicot Station - CDT).  It is about 10-15 minutes from the Castle

- Trains from Birmingham and the north typically change at Cheltenham for Caldicot.

- Trains from London Paddington (PAD) and the east typically change at Newport.

- Trains from Cardiff Central (CDF) and the west can sometimes come direct to Caldicot.

- Trains from Exeter St Davids (EXD) and the south typically change in Bristol.

Severn Tunnel Junction (STJ) is the next nearest station is in the neighbouring village of Rogiet but is a 40 minute walk.

Both stations are small and there are NO taxi ranks.

When leaving from Caldicot or Severn Tunnel Junction there is no ticket machine - so you have to buy your ticket on the train.

Chepstow Coach Station is on the National Express network.

The X74 bus (see above) stops nearby and Chepstow also has a railway station, but it is at the other end of town so be prepared to walk).

There is a small taxi rank but it is fairly erratically populated, so plan ahead if you want a cab.

You will be in Wales, so there is always the chance of encountering a Red Dragon.  If you do come across one do not panic, but instead offer gold, or the severed head of an Englishman.  In reality Monmouthshire is border country, with a lovely blend of Welsh and English culture.  In reality the most exciting creature you're likely to meet is a Beer Golem.  They are normally very friendly and can be relied on to tell you which of the chippies in town is best.